It comes as no surprise to me that as soon as I graduated college with an art degree that the hippest thing in the art market would become the work of untrained artists. So I guess that my defense in that regard would be: I was trained in Oklahoma, now how educated can I possibly be?

I’m joking, of course. And while anything outside of the metropolitan areas may be considered lacking in culture to some, I consider myself fortunate that I did get a good education in art at a time that many art colleges were under some notion that expecting the students to produce within guidelines of design, color theory, and optical observation might squash the budding flower of their delicate geniuses. And with art graduates having accomplished little other than to spend thousands of dollars a month to play with paint for four years without instruction, why wouldn’t the market turn to the untrained?

But, to get to the point: yeah, I was trained to paint by a bunch of cowboys. But it wasn’t such a bad bargain either. I’ve tossed off more of their instruction than I’ve kept maybe, but it’s all like Bruce Lee said about why one should acquire disciplined skill: So that it will be there when you need it.

The foremost thing that I’ve kept is that I still use very near to the same palette that I was taught: that being a palette of only primary colors. All shades and all secondary or tertiary colors are mixed on the canvas. (By the way, I wasn’t taught the “on the canvas” part. That’s the result of my own bad habits.) At the end of a painting I usually have several different colors going on, but when they first hit my canvas they were either red, blue, or yellow. Well… or black or white or maybe burnt umber, but I haven’t even bought purple paint since I was in high school.

This continued practice of starting with only primaries and mixing as I go has helped to give form to my own style of painting. Being as I slap it all on with a palette knife, and paint almost entirely with the knife, the mixture of shades and colors within the stroke is what causes the somewhat calligraphic character, or, as some would say: “the movement,” of my surfaces. If there’s anything I hate it’s a square inch of flat color. For this reason I actually don’t like to fully mix or integrate my colors, and will paint an area over and over until I’m happy with the contrast of color that exists within the area.

High contrast is important to me. Contrast not only in shade but in color. After periods of entirely ignoring color theories I eventually returned to using classical color schemes and some amount of regard for the color wheel. Monochrome schemes will put me straight to sleep. Same with analogous schemes. At the least use a triad, but the most preferable scheme to me is a complimentary scheme, and a double complimentary is the best. For the layman, a complimentary scheme is the use of colors which, as they appear on a color wheel, are in opposition to each other. Side by side they will exalt each other, as one contains none of the elements of the other.

I am fortunate to have a rather natural sense of composition. As with my textures, I prefer a composition that keeps your eye moving around the space. Here again, little if anything is worked out prior to attacking my canvas. The vast majority of my preliminary sketches are only to determine proportions of my canvas. Like mixing colors, tackling compositional problems is something that occurs in the process and on the canvas.

As I’ve said, I work almost entirely with a palette knife. This makes for some thick paint. I like thick paint. (I don’t like the cost of thick paint since I run through my materials too fast, but I still like thick paint.) The only brushwork that I do on a painting is at the very end of the process, and then only for detail. The palette knife might be just a bit too clunky to get that little light reflection in the eye.

Most art is viewed in print, or in some form such as that. Visiting my site you are seeing images of paintings, not paintings. The factors of my own paintings which I think are lost the most in reproduction would be the thickness of paint and the size. I like to work big, and feel like I couldn’t satisfactorily do what I do on a small scale. There just needs to be room for broad strokes and thick paint. 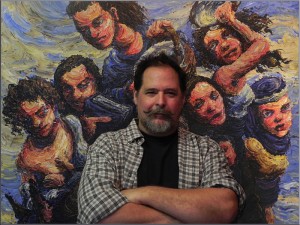 Learn more about the life
of David Goodrich on his Facebook Page.

View the amazing travel photography on his Flikr Page - much of the inspiration for his Art flowed from David's constant travels and his sharp eye for detail.